The Middle Dadant Hives, commonly known as industrial hives,are named after the American Charles Dadant.
This popular hive is actually a redesign of the Langstroth hives,basically it was one of the first modifications that were made to them. This design has had a great welcome in France and Spain as it offers one of the best averages in terms of honey production.
These are vertically growing hives and, among its advantages, it has the possibility of efficiently developing a large-scale beekeeping and transhumance. It is considered, together with the Langstroth, the hive par excellence worldwide.
Its measurements are very similar to the Langstroth, the only thing that changes is the height of the paintings. In relation to the other elements and materials, it is like the Langstroth hive.
The Medium Rise Hive Dadant has a large breeding body,allowing it to maintain important bee populations and give them more space to gradually store honey, ideal for fast blooms.

Advantages and drawbacks of the Average Dadant Up Hive

It depends on the area to be used it will be better to choose one hive or another. It is also important to take into account the time available to meet them, the future prospects and if you plan to carry out an ecological beekeeping.
The intention to do transhumance also plays a key role in choosing a Dadant hive, a Langstroth or a Layens.

The height of the paintings of this hive is 7 cm more in the breeding chamber, but 7 cm less in the honey rise than that of a Langstroth.
The frames are constructed of food polypropylene and measure 480x160x25 mm.
The cells,meanwhile, measure 5’9 mm in diameter from end to end and 5’5 mm deep on each side
It is sold in boxes of 30 units.

The material with which the feeder is built is food polypropylene. It measures 480x145x33 mm and has a capacity of 1.5 kg.
Like the painting, it is sold in boxes of 30 units.
It is important to remember to impregnate the sheet with wax so that the bees take the sheet more efficiently.

The sheet, which attaches to the wooden frames, is made of food polypropylene.
It is important to note that each Sheet of Dadant wax cut in half, will have the measurement for 2 half-upward frames. 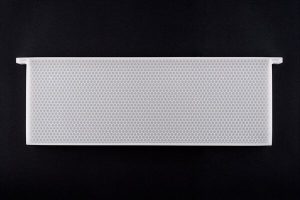 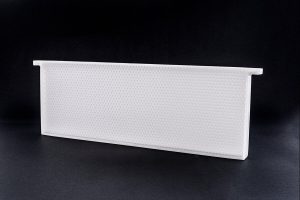 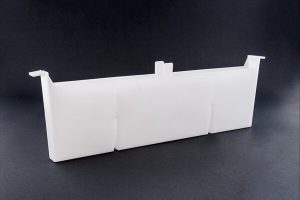